​Originally a Londoner, I've worked as a schoolteacher, an arts journalist,  PR to a Scottish politician and PA to an American rock star.   I'm now concentrating on finishing my first novel, working title Light Switch, while working as a social media manager for various clients and helping to run our family's tourism business on Scotland's north-west coast. I frequently interrupt myself with new poems, flash fictions and short stories, and my work has most often been described as speculative, neo-noir or modern gothic.

COMING SOON:  WHO AM I SUPPOSED TO BE DRIVING?
A pamphlet of thirteen ekphrastic poems in response to the music of David Bowie
Winner of Hedgehog Poetry Press 'Baker's Dozen' competition for 13 poems on a single theme
Publication 9 August 2022 -  contact me to pre-order a signed copy!
​Print copy £7.99 + postage  E-book £3.99
Cover illustration Ruairdhri Wright
More details HERE 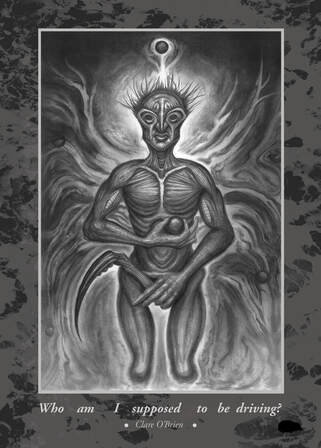 ​Perhaps we were all tall children then,
playing games on asphalt under alien stars,
the heat boiling up through the cracks.
​
Named after a line in an outtake from his 1996 album 1.Outside, ‘Who Am I Supposed To Be Driving?’ is a collection of ekphrastic poems written in response to thirteen of David Bowie’s albums, from 1969’s Space Oddity to 2016’s Blackstar.  The ultimate changeling, Bowie wrote songs that led us into landscapes as various and exotic as the characters he created to sing them.
These poems aren’t a critique.  They’re not a biography. They’re not an attempt to paraphrase or explain the music which inspired them.  Instead, they’re an exploration of the emotions the work creates, and the lost worlds from which these iconic albums first emerged.
Or perhaps they’re just the abstract thoughts of a flight controller, working the night shift, wishing Major Tom would return.

"Fizzes like a fuse connecting the classical world to the transient world of fame and celebrity...  a poignant reminder of the power of music to inspire us, to move us, but also of its capacity to shape the darker corners of our minds." - Giles Kristian, Sunday Times bestselling author of Lancelot.

"Captures the essence of Bowie...weaves worlds within us, reminding us not only of what we have lost but of what still remains. A stunning tribute to a mighty talent." - L.G. Thomson, author of Boyle's Law
PUBLICATION HISTORY

BLOG: MUSING WHILE I WORK